Home » Company News, Research and Industry Trends » How to Hire Like Amazon, Google or Microsoft, Even if You Aren’t
× Share this Article

While some recruiters may daydream about how much easier their jobs would be if they worked for a recognizable tech giant, the fact is that companies like Amazon, Apple, Google and Microsoft still have to compete for top talent – especially in today’s tight labor market.

So how do these companies identify and hire the best employees, and – more importantly – how can you put those strategies to work for your organization? Here are a few recruiting methods they employ:

This step is practiced across the board for leading tech companies – and probably fairly common for nearly every job in the country. After all, if a candidate is incapable of performing the job’s basic functions, nothing else really matters.

In Amazon’s case, skills aptitude testing may take place before a candidate even reaches the interview with the hiring team. At Microsoft, once a candidate has been identified, a Microsoft recruiter does an initial behavioral-based screening with questions designed to look at the candidate’s technical aptitude if they are going for a tech job, or other aptitude if it’s a role in a different area of the company, according to Chuck Edward, Microsoft’s head of global talent acquisition.

Keep All Openings in Mind

Many of the biggest companies in the world reach that rarified level by creating efficiency. Amazon, a company frequently associated with efficiency in a variety of fields, provides a good reminder of one of the easiest ways to improve recruiting efficiency for any business – staying focused on the bigger picture.

As senior recruiter for supply chain technology at Amazon recently told Fast Company, “We can often consider a candidate for more than one role, so I always recommend that the candidate stays open-minded and curious about opportunities at Amazon.”

And speaking of open-mindedness…

Focus on How the Candidate Thinks

Beyond technical abilities, many of the most successful companies in the world make hiring decisions based on how candidates think. At Google, candidates may be asked what type of animal they would be and why, or what the company might learn about them from their web history that isn’t on their resume. Apart from being a vaguely threatening question coming from a company like Google, these questions are designed to help the interviewer get an un-rehearsed answer, ideally providing a clearer picture of how the candidate thinks under pressure.

Similarly, Edward says that, while there isn’t a company-wide policy at Microsoft to ask strange or absurdist questions during interviews, some hiring managers may still use them to see how a candidate thinks on their feet. However, according to Edward, Microsoft’s hiring managers are much more interested to see whether a candidate demonstrates self-awareness regarding what they are hoping for from a new job, and why the candidate thinks they might find it at the company.

No matter how big, successful or well-known your company is, job seekers aren’t likely to tolerate a long wait or poor communication. Our research shows that 1 in 5 applicants won’t finish an application if it takes longer than 20 minutes, and 66 percent of candidates will move on if they don’t hear back from a company within two weeks.

And according to Fast Company, Amazon clearly understands this. It may not be surprising that the company famous for delivering products of all shapes and sizes to your door in just a few days has an equally speedy hiring process; one employee in particular pointed out that the process was efficient and took less than two weeks.

Turning a great candidate into a great employee takes more than just saying “You’re hired.” Transitioning into a new job is almost always tricky, and even the most qualified candidates will need your help.

In a recent internal study, Microsoft found that giving new hires a working computer with access to email and the company’s intranet, as well as access to the building on their first day were major factors in new employee engagement and productivity.

The study also revealed that a one-on-one meeting between new employees and their manager within the first week could have immense impact on the employee’s long-term success. Employees who met with their manager in the first week went on to be more collaborative, build a larger internal network and feel more personally invested in the company – all of which are associated with higher intent-to-stay responses.

A mobile recruitment strategy can help you find and hire the right people faster. Here’s how you can effectively Recruit Candidates with Mobile Technology.

Are you one of the staffing and recruiting experts headed to ASA Staffing World 2018? If so, lucky you! In ... 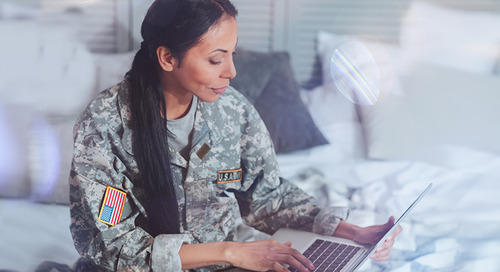